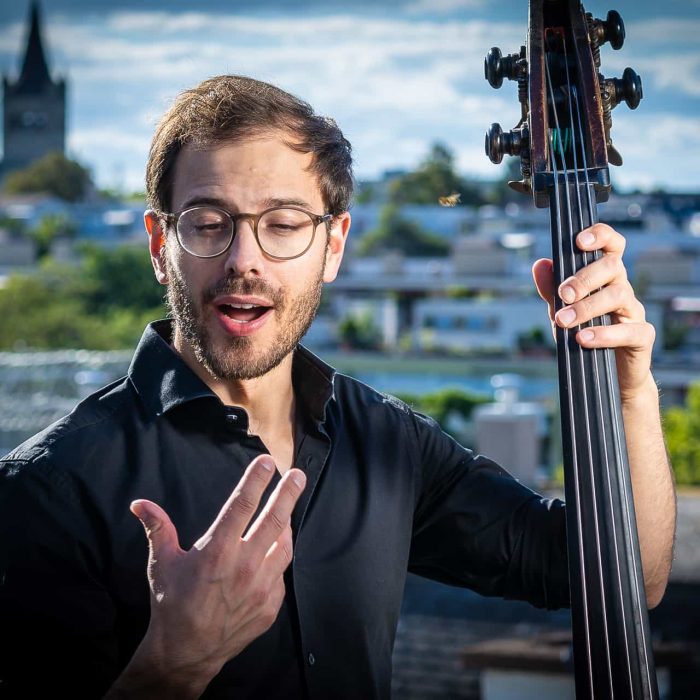 Justin DiCioccio (Manhattan school of Music, NYC) once said to me:

So that’s what I set out to do…
With a burgeoning international career, Rafael Jerjen is a bass player, composer and educator. Currently based in Lucerne, he was educated in Australia (Bachelor of Music in Jazz Performance (Honours) at the Australian National University under bassist Eric Ajaye), the USA (New York with John Patitucci), Berlin, and Switzerland (Master of Arts in Jazz Performance at the University of Applied Sciences and Arts Lucerne with bassist, Heiri Kaenzig). Rafael also studied composition with renowned composer and big band leader, Ed Partyka.

Active as a composer, arranger and bandleader, Rafael leads the Rafael Jerjen Concept and MaxMantis, and has toured extensively in South America, Australia and Europe.

A passionate educator, Rafael recently succeeded his former professor, Heiri Kaenzig, as lecturer for jazz bass at the Lucerne University of applied Sciences and Arts (HSLU) and has represented the HSLU at the renowned International Association of schools of Jazz (IASJ) run by Dave Liebmann.

Jerjen is extremely dynamic, and has an incredible sound.…

Rafael Jerjen rounds of his musical life by delving into the inner workings of “Groove” research at HSLU in Lucerne. As a research assistant and bass expert for Prof. Senn’s “Groove Team”, he spends his time in transit between concert venues transcribing some of the greatest bass lines of all time for the purposes of better understanding what makes us all want to move to music.

Thereʼs a real traditional solidity and confidence in his playing, … And thereʼs sheer joy.

2013
Full scholarship for the Masters of Arts – Performance degree at the Hochschule Luzern.

This website uses cookies to improve your experience while you navigate through the website. Out of these cookies, the cookies that are categorized as necessary are stored on your browser as they are essential for the working of basic functionalities of the website. We also use third-party cookies that help us analyze and understand how you use this website. These cookies will be stored in your browser only with your consent. You also have the option to opt-out of these cookies. But opting out of some of these cookies may have an effect on your browsing experience.
Necessary Always Enabled
Necessary cookies are absolutely essential for the website to function properly. This category only includes cookies that ensures basic functionalities and security features of the website. These cookies do not store any personal information.
Non-necessary
Any cookies that may not be particularly necessary for the website to function and is used specifically to collect user personal data via analytics, ads, other embedded contents are termed as non-necessary cookies. It is mandatory to procure user consent prior to running these cookies on your website.
SAVE & ACCEPT